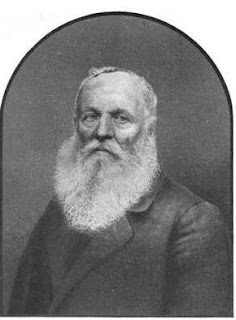 I'm going to go out on a limb here and say that the world is full of assholes. I know, it's a tough pill to swallow, but here we are. You get assholes who just can't stand it when someone else does something they don't understand and you get assholes that can't bear someone being happy and keeping to themselves. Luckily, there are occasional heroes who stand up for the God given right to exist without having to answer to these drooling buffoons.

One of those heroes was Joseph Palmer, who hailed from an olde timey village just outside of Leominster. He had the courage to live life the way he wanted and he never made a single excuse for it. This was a man who knew the glory of a luxurious full face beard and suffered in its name. That's right; our hero Joseph Palmer was...

Joseph's story began in 1798 when he was born in Massachusetts. He grew up and turned into a farmer living is Notown, MA. Although it's now just a bunch of sweet looking ruins and a reservoir, it used to exist where Fitchburg, Leominster, and Princeton meet. It served as a small farming commune where the early 19th century version of filthy hippies used to do their thing.

He was a veteran of the War of 1812 and, most importantly to some, he had a magnificent beard. He started wearing it in the 1820s and loved it like a very hairy child.

The problem was that, at this point in history, men didn't really wear beards anymore. They had fallen out of fashion sometime around 1720. That meant that Palmer had the audacity to go around in a style that hadn't seen the light of day since before the United States was actually born. This method of quietly doing his own thing was enough to drive all of the local assholes into a violent rage.

You know who these kinds of people were, by the way. You see them all of the time. They're the assholes who think they're better and smarter than anyone else on the planet, even though they've never cracked a book or traveled more than three miles from home. They're the types of douchey bros who travel in packs and pick on anyone they deem to be smaller and weaker than they are. Then, once their targets actually stand up for themselves, these assholes suddenly become the victims.

You saw a lot of them come out of the woodwork in the earlier days of quarantine. They were the ones setting off fireworks in your neighborhood at 3am on a Tuesday, then rushing to Facebook to ask why everyone was "butt hurt" by the explosions. They have no consideration for the people around them and cry about their freedoms being oppressed just because their neighbors want to actually sleep at some point. They enjoy all of the benefits of living in a community but do nothing to make it better. If they need help, it's the rest of the world that has to provide it because they deserve it. If it's the rest of the world that needs help, it can just fuck right off and fuck itself again, because they've always taken care of themselves and that's what everyone else should do.

So, ole beardy was just minding his own business one day and delivering fruits and vegetables from his commune to a Fitchburg hotel. Four bros saw him and decided that his facial hair was their business and attacked him with scissors and razors. They were intent on shaving him because this was the 1800s and they had nothing better to do.

They would have gotten away with it, but this was a war veteran who was used to living off the land. He fought back and managed to stab two of them in the leg with a knife that he always carried with him. Just like the bros of today, his insistence on not being overpowered and assaulted by them immediately turned them into the victims. Joseph was arrested and charge with "unprovoked assault." That's what you get for fighting back and bringing a knife to a scissor fight.

Palmer got arraigned a few days later and found guilty by a judge named David Birmingham. The resultant sentence had him paying a $10 fine, court fees of $40, and a full $700 court bond. That $700 is a lot today, but keep in mind that this is 1830s money. Adjusted for inflation, that would amount to $19,803.91 in 2020. That's a fuck of a lot of cash for defending yourself and he just flat out refused to pay it.

He may have had the moral right on his side, but he got thrown in jail nonetheless. He wound up in Worcester County Jail for fifteen months and nary a thing happened to the people who attacked him.

Once inside, Joseph Palmer kept a detailed journal of all the shit that was going down in this place. He recorded the fact that he got sick as shit as soon as he got tossed into his cell. After he recovered, he was treated to regular beatings from the guards, starvation, and still had to deal with other prisoners threatening him over his fucking beard.

On top of his journal, he was also making good with his time by sending a constant barrage of letters to the sheriff of Worcester County, one Calvin Willard. He made sure the guy was kept up on all of the beatings and punishments that rained down on him. He even sent him every last bit of food that he was given on one entire day, which was almost nothing, especially given the fact that it fit inside an envelope.

All of this led to entire committees visiting him in prison and begging him to leave. They even agreed to waive the $700 bond so he would just have to pay the fines and fees and be done with it. Palmer was all like, "Hey, 50 bucks is 50 bucks" and told them to fuck off.

Okay, actually what he said was much more mature  and a whole lot deeper. He was quoted as saying: "If I ain't a safe person to have my liberty I ought not to go out. And I am willing to stay in confinement til I am."

It wasn't until the judge who put him there in the first place, David Birmingham, finally realized that the punishment he gave him far outweighed his crime. He visited Joseph with a letter from his mother in hand and he finally relented. It turns out that when your 80 something year old ma begs you stop being tortured for her sake, you just have to listen. He paid the $50 and peaced the fuck out of that place for good.

Life in the Sun

Joseph Palmer spent the next few decades working for prison reform and was an early adopter of the abolitionist movement. He also palled around with the likes of Amos Bronson Alcott, father of the one and only Louisa May Alcott. If you've ever read her book "Transcendental Wild Oats" and remember the character Moses White, that was him. She based that character off of him, and that's pretty cool, right?

He also worked on growing communes in Harvard and Leominster and eventually passed away at the age of 84 in 1873. Coincidentally, beards had come back into fashion by that time. The last few things he would have seen in his life were scraggly faces as far as the eye could see.
He's buried at Evergreen Cemetery in Leominster and his headstone stands as a bold reminder that assholes are everywhere, but fuck 'em. Keep your beard long and your head held high. Maybe someday you'll be in a book!

If you'd like to keep up with all the latest Slightly Odd posts, please like us @slightlyoddfitchburg on Facebook or subscribe at the top of this page!
Beard Boston cemetery central mass fitchburg halloween history Joseph Palmer massachusetts

Nestled deep within Fitchburg, and far away from the consciousness of anyone outside Worcester County, you'll find Dean Hill Cemetery. It's a decently sized open field with far fewer headstones than you're used to seeing in a graveyard. It was established in 1791 as a resting place for the soldiers of the Revolutionary War and their families. Colloquially known  as "The Rev," it's also home to more than its fair share of ghost stories. Join us, if you will, on our search for the... Ghosts of "The Rev!" JUMP SCARE! There's really no way to overstate just how out of the way this place is. To give you an idea, here's the road leading up to it: If you squint, you can find the serial killer. It's on Ashburnham Road and was once close to the Dean Hill Tavern, which was built around 1777. The tavern is no more, but the cemetery still stands and gets all sorts of visitors, however unwelcome they may be. The ce